“Sogetsu can be arranged anywhere in the house. You can use materials other than flowers. You can express yourself in any way that you like.” In 1990, the San Jose-South Bay Branch was founded under the guidance of Narimatsu Shoka Sensei.  Kika Shibata Sensei became the branch director in 2003. We have 110 members, and we are a multi-ethnic group with members from Japan, Taiwan, China, Vietnam and North America. Branch activites include demonstrations, workshops and annual branch exhibition. Biennially, we invite the master instructors of the Sogetsu Headquarters for a demonstration and workshop. It’s a major event that gathers Sogetsu artists from all over North America. 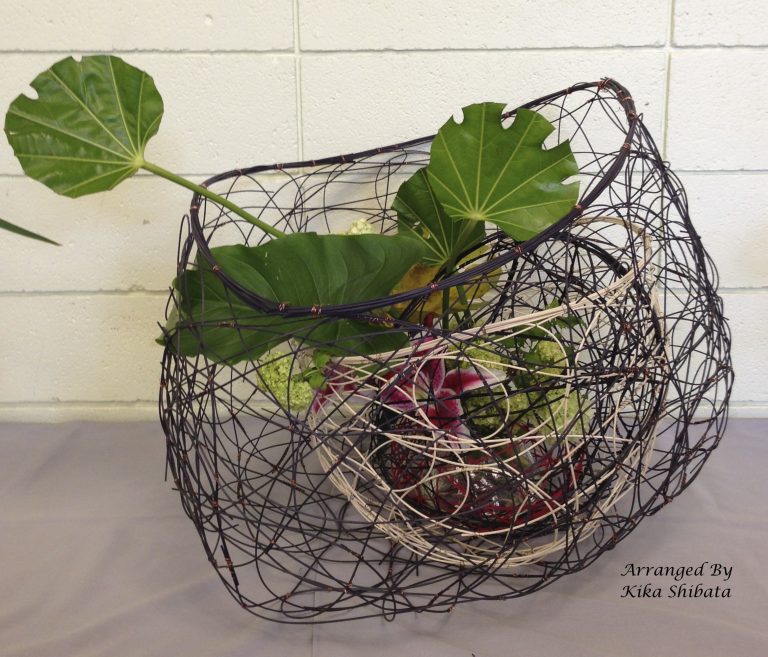 Kika Shibata Director was introduced to the art of flower arrangement at the early age of four in Kumamoto Japan. Her mother and teacher Mrs. Shoka Narimatsu was her inspiration. After moving to the United States, she continued to study under Narimatsu Sensei and worked as her assistant.

Kika Shibata Director received a teacher’s certificate in 1966. In March 1989, she was awarded the prestigious title of “Riji”, the highest degree offered by the Sogetsu School. In 1990, she was assigned as the Deputy Director of the Sogetsu San Jose South Bay Branch.  In 1996, she was appointed Sogetsu Regional Director of North America.  In 1997 she was President of the Ikebana Teacher Federation. In 2001, she received “the International Award”, recognizing her as the most active Sogetsu instructor on the international scene. In 2003, she was appointed as the Director of the Sogetsu San Jose-South Bay Branch.  In 2004, she received Award from Kevin Shelley, Secretary of State of California. In 2007, she had the honor of receiving 80th Sogetsu School anniversary Foreign Award from Headmaster Akane Teshigahara.  In 2014, she celebrated her over fifty years teaching as a Sogetsu teacher.

Kika’s forte is her unique line design that enhances both living and work environments.  Among her many clients are banks, restaurants, hotel, art galleries, and private events. She is frequently invited by various organizations, school, museums and professional floral associations to conduct demonstrations and workshops.

Sogetsu students and teachers benefit from practicing Sogetsu all over the world. We are glad to be part of such a motivated, dedicated and fun group of people.